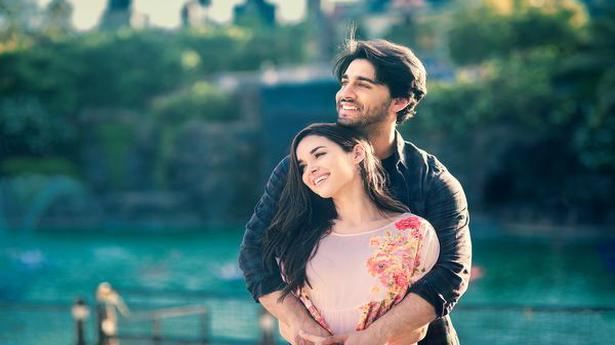 Music is powerful. It is soothing, can heal and effect a change across the world. AR Rahman, the writer and composer of 99 Songs, is living proof. Unfortunately, on the evidence of 99 Songs, writer Rahman does not yet possess the nuance required to seamlessly translate that concept to the big screen.

99 Songs follows Jay (Ehan Bhat) — an aspiring musician, whose childhood we learn through montages and flashbacks as the story progresses. He grows up with a father who detests music, but the protagonist finds his calling anyway.

He is in love with a mute girl, Sophia Singhania (Edilsy Vargas), the daughter of a rich industrialist. He wishes to marry Sophia but we have a stereotypical dad who doesn’t believe in Jay’s dreams of becoming a musician. When Jay stands his ground, the dad lays down a challenge — compose 100 songs before he can come around asking his daughter’s hand in marriage.

And so Jay sets out on a journey that turns both his and Sophia’s worlds upside down. How the duo reunites by overcoming hardships, self-doubt and infidelity rumours form the rest of the plot.

In its visual narrative, 99 Songs is a nerd fest — especially for those who work closely with musical instruments. There are fabulous shots of the music making process that can only serve the interests of a niche community. The issue which serves as the film’s undoing is the boring, old (read as: done to death) story line, and the familiar tropes.

As someone who looks like a teenage version of Hrithik Roshan, Ehan Bhat looks ambitious — to play the part of Jay, but there is no way artistes can get a grip on their performance when the story just ambles, and that too towards a predictable end. The ambling affair is more pronounced in certain portions — like when we are introduced to a flashback sequence of Jay’s mom, the general feeling is, “Speed up things, please!”

Films like 99 Songs need not necessarily bank heavily on a unique screenplay; it is a musical, audiences walk in seeking an experience of a different kind, and which composer Rahman does provide in abundance — the Jazz club sequences in Shillong, ‘Jwalamukhi’ track and the many piano riffs are a treat to savour. However, the success of a musical also rests on tying the viewer emotionally to the conquest of the protagonist.

99 Songs essentially being a Hindi film — the dialogues are dubbed, which does make you feel like you are watching a Jackie Chan film on Star Vijay on a Sunday (90s kids will get this) — there is little of relevance to a South Indian audience, much less a Tamil audience. The protagonists are rich people — a trope very common in Bollywood but not so much in Tamil cinema, at least in the new millennium. This presents a very interesting proposition for an audience conditioned to see their protagonists as one among the masses; so at the outset it is tough to see how Jay’s pursuits would find the emotional connect with the masses for whom the film is made.

Secondly, successful musicals — for example, School of Rock, bank on an engaging screenplay. 99 Songs lacks it.

Interestingly, there is VFX in this musical whose final product seems more a misplaced idea than how it seemed when it germinated in the creator’s head. However, certain sequences do land well, like when Jay has an out-of-body experience — when he is touched, literally, by the goddess of music (or his mom) — are nuanced additions to the storytelling, but beyond that there is little else to Jay or his pursuits that keeps us invested.

At some point, Manisha Koirala’s character in the film remarks: “Music will be the last remaining magic in this world.” At least in the case of 99 Songs, it is true, and especially because good scripts and engaging screenplays are going extinct at a dangerous pace in Indian cinema.

‘99 Songs’ is currently playing in theatres