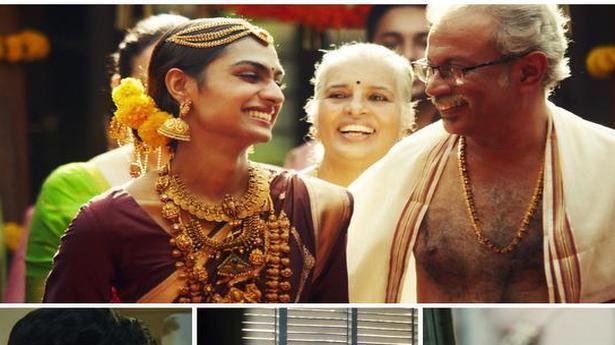 I remember writing some time ago, when we humans still went to cinema halls to watch movies, about the ghastly sari and jewellery ads one has to endure in Chennai theatres. Stuffed to the gills with giggling sakhis, havelis and hom kunds, the ads were extremely regressive. Now, just as OTT films are beginning to boldly suggest that Indians too might actually indulge in sex and nooky, so too are ads pushing the boundaries.

The 96-year-old Kerala-based Bhima Jewellery’s latest film is quite a trailblazer even in a universe that has seen jewellery brands talk of single women, second marriage, and inter-religious weddings, although that last came in for tremendous flak from the new breed of haters that we have, umm, bred.

Crafted as carefully as a movie, the Bhima ad traces the journey of a transwoman from childhood to marriage, each of her life’s milestones marked, of course, by pieces of jewellery — but gently and sensitively marked. The slow transformation of the brooding, unshaven young man with sad and unsure eyes into a beautiful, confident, laughing young woman takes just about 100 seconds to unravel but packs in a lifetime of hope and fulfilment.

It’s a journey with one important facet — accepting parents. Instead of the usual horror and rejection that greet those who discover that their gender is different from their birth-assigned one, what greets the transwoman here is a very quiet but strong underpinning of love and support. From the ladies bicycle parked in the bedroom to the golden anklets gifted by the father to the mother waiting patiently while her son/daughter gets her ears pierced, each little thing moves towards the transformation.

The film works also because it understates. There is no melodrama, no tears, no preaching. Each fleeting frame is packed with significance but subtly so. From the pink of the ice-cream stand to the rainbow hues of the bubbles she blows on the beach to the thoughtful stroking of the beard in the first scenes, everything is mined for meaning by the director, Bharat Sikka, but he does it so quietly it merges with the scenery.

Most importantly, the transwoman emerges with dignity intact, both in her previous and present avatars. Avoiding the usual scenes of humiliation and transphobia might seem idealistic, and it probably is, but it achieves a crucial goal — it allows for a normalising and wholesome depiction of the trans body, making it as routine as a hetero body. More important, it presents an alternative way of responding to a trans person. When this comes wrapped in the consumerist glitter of gold and jewellery, it carries the power to become more palatable than when delivered in the brown-paper packing of homilies.

I have written before of an important role that advertising plays — that of iconography for the religion of consumerism. And while its end goal is indubitably to make people buy more, its collateral fallout in making people think differently has always been significant. There is a great deal of subconscious messaging going on through those 100 seconds — the grandmother braiding the protagonist’s hair indicates an older generation’s acceptance; the family’s lunch in a simple eatery signals that the parents aren’t ashamed to be seen with their son-now-become-daughter, a transformation that would after all have been wrought very publicly.

There is an early scene where the protagonist sits alone in the kitchen, peering out at the street, at the larger world that she seems excluded from, but towards the end, the film suggests that internal acceptance — by one’s own self and by one’s near and dear ones — has brought the external world closer. That world, of course, includes the audience in its ambit. That’s the advantage advertising enjoys — it is able to inject conversations around enormously momentous and divisive issues right into drawing rooms and kitchens, disguised as just another jewellery ad.

Chances are this film too, like the Tanishq one showing a Muslim mother-in-law and Hindu daughter-in-law, might be greeted with outrage. But chances also are that brands will keep making such films. Apparently, the idea came from Navya Suhas, a fourth-gen scion of the Bhima Bhattar family. Perhaps we are on the cusp of a generational change, where the millennials and Gen Zs are bored with the plethora of prejudices they are expected to carry. Perhaps they will be happier to just be and not judge.

Where the writer tries to make sense of society with seven hundred words and a bit of snark.