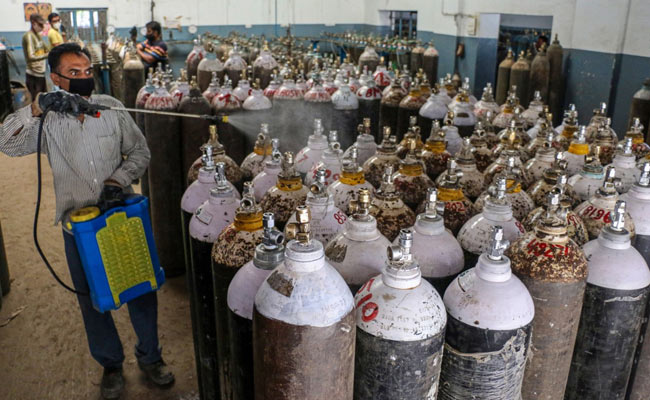 Delhi does not have its own source of oxygen; the supply comes from Haryana and UP (Representational)

With several private and government hospitals in Delhi running low on medical oxygen for COVID-19 patients, the centre raised the national capital”s oxygen quota from 378 metric tonnes to 480 metric tonnes on Wednesday.

“Central govt has increased Delhi’s quota of oxygen. We r very grateful to centre for this (sic),” Chief Minister Arvind Kejriwal said in a tweet.

Central govt has increased Delhi’s quota of oxygen. We r very grateful to centre for this.

The centre announced that it will supply 480 metric tonnes of oxygen to Delhi, which will come from Odisha, West Bengal, Uttarakhand, Haryana, Uttar Pradesh and Himachal Pradesh, the city government said in a statement.

“What remains a matter of grave concern is that of the 480 metric tonnes, 100 MT oxygen from Odisha (70 MT) and West Bengal (30 MT) will take almost 72 hours to reach Delhi. Our citizens, our hospitals, our city is running out of time,” it said.

Meanwhile, the 140 metric tonnes of oxygen that Haryana has to supply was yet to leave for Delhi around 8 pm.

On Monday and Tuesday, around 240 MT and 365 MT of oxygen was supplied to Delhi against the requirement of 700 MT per day, the statement said.

Since Delhi does not have its own source of oxygen, the capital’s supply comes from Haryana and Uttar Pradesh.

Hours before the announcement, Delhi Deputy Chief Minister Manish Sisodia alleged at a press briefing that an official of the Haryana government stopped oxygen supply to Delhi from a plant in Faridabad.

The neighbouring state, however, denied the allegations.

Several hospitals in Delhi also alleged that the Haryana government was not allowing vendors to supply oxygen to them and there is only a limited stock left as hundreds of coronavirus patients battled for their lives in these healthcare facilities.

“If the oxygen quota gets depleted in these hospitals, Delhi is staring at a catastrophe waiting to unfold,” the Aam Aadmi Party (AAP) government said in the statement.

Suppliers are facing obstructions from the district authorities of Haryana and Uttar Pradesh, it added.

“It is indeed unfortunate that states like Haryana and Uttar Pradesh are curtailing the supply of life-saving oxygen to Delhi. Just as the Haryana government, the Uttar Pradesh government has illegally captured the oxygen production plants, depriving Delhi of oxygen,” the statement read.