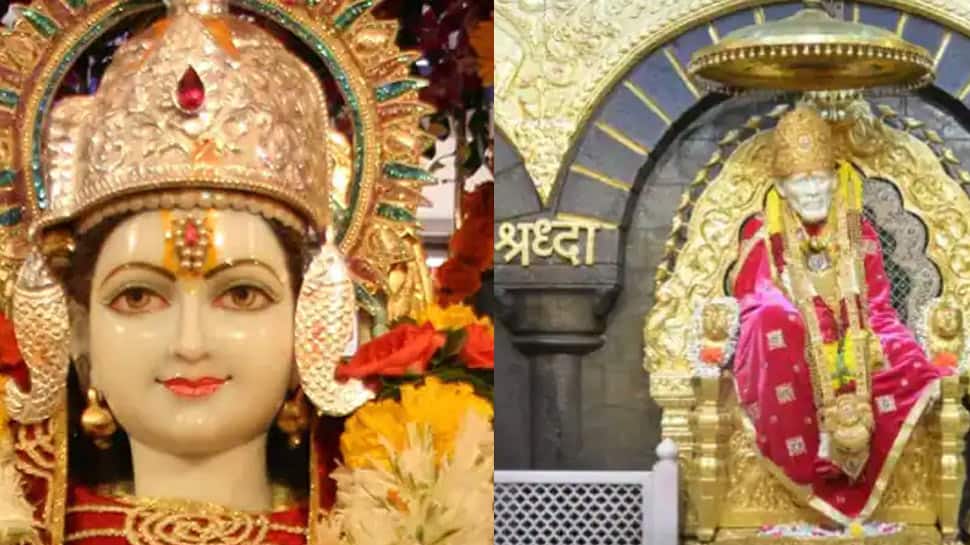 New Delhi: On the auspicious occasion of Ram Navami, which is being celebrated this year on April 21, devotees pray for the blessings of the Lord. The day also concludes the 9-day Chaitra Navratri festival which began this year on April 13 respectively. Much like everywhere else, Lord Rama’s birthday is celebrated with much gusto in Shirdi.

This year, celebrations are low key due to the deadly novel COVID-19 pandemic. With the surge in corona cases, several religious places including Shirdi Sai Baba temple has been closed for public darshan.  Along with the Sai Baba temple, the ‘Prasadalaya’ and the ‘Bhakta Niwas’ is also be closed. The Shirdi temple administration took the decision in the first week of April after the Maharashtra government announced a partial lockdown in the state amid rising coronavirus cases.

It is believed that Shirdi Sai Baba took Mahasamadhi on the day of Vijayadashami or Dussehra. Therefore, during the Chaitra Navratri which falls in March-April, the Ram Navami day is celebrated as Baba’s birthday and Sharad Navratri culminating on Dussehra is the day when Baba went Antardhyan.

Both the days are observed in a huge manner at Shirdi Sai Baba’s temple where devotees make a long queue just to get a glimpse and blessings of the lord.

The name Sai was given to him by Mhalsapati upon his arrival in the temple town of Shirdi as not much is known about Sai’s birth. According to Sai Satcharita, Baba came to Shirdi when he was only 16-year-old. It is believed that he came along with a man who was coming for a wedding to the place. Many believe that Baba’s date of birth happens to be September 28, 1835.

There is still no definitive date which can claim Baba’s birthday.

THE LEGEND OF RAM NAVAMI CELEBRATIONS:

Baba’s ardent follower named Gopalrao Gund was childless for a long time and finally was blessed with a son. To offer his thanks to Baba, seeking blessings for the newborn baby too, he took Baba’s permission to organise a thanksgiving fair which coincided with Urus, a festival of Muslims in honour of a Sufi saint.

Gopalrao Gund had a friend by name Damu Anna Kasar of Ahmednagar. He also was similarly unhappy in the matter of progeny, though he had two wives. He too was blessed by Sai Baba with sons and Mr. Gund prevailed upon his friend to prepare and supply one flag for the procession of the fair. He also succeeded in inducing Mr. Nanasaheb Nimonkar to supply another flag. Both these flags were taken in procession through the village and finally, fixed at the two corners of the Masjid, which is called by Sai Baba as ‘Dwarkamai’. This is being done even now.

An excerpt from Sai Charitra mentions:

There was another procession which was started in this fair. The idea of ‘Sandal’ procession originated with one Mr. Amir Shakkar Dalal, a Mohammeden Bhakta from Korhla. This procession is held in honour of great Muslim Saints. Sandal i.e. Chandan paste and scrappings are put in the Thali (flat dishes) with incense burning before them and carried in procession to the accompaniment of band and music through the village and then, after returning to the Masjid, the contents of the
dishes are thrown on the ‘Nimbar’ (niche) and walls of the Masjid.

This work was managed by Mr. Amir Shakkar for the first three years and then afterwards, by his wife. So, on the same day the two processions, the ‘Flags’ by the Hindus and ‘Sandal’ by the Muslims, went on side by side and are still going on without any problem.

Sai Baba made Dwarkamai masjid his abode and on Ram Navami day, flags are changed there.

With many more legends and events which unfolded post this, according to Sai Charitra, from 1912, the Ram Navami festival was thus going on, the procession of the two flags by day and that of the ‘Sandal’ by night, went off with the usual pomp and show. From this time onwards, the ‘Urus of Baba’ was transformed into the Ram Navami festival.

Sai Baba of Shirdi is a spiritual figure worshipped across the globe. The saint or fakir of Shirdi has an ocean of devotees scattered in every corner of the world. Baba’s teachings and learnings have travelled over years and people irrespective of their religion have shown utmost faith in the Satguru.

God Is One’ was his motto and ‘Sabka Malik Ek’, Allah Malik favourite epigrams associated with Sai Baba of Shirdi.

Om Sai Ram and a very Happy Ram Navami to all!