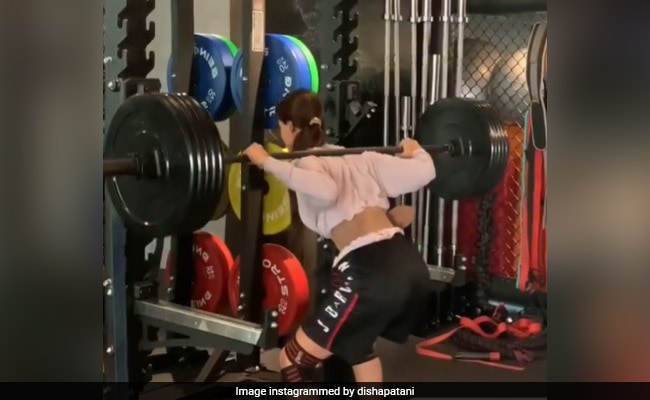 Disha Patani in a still from the video. (Image courtesy: dishapatani)

Disha Patani is a fitness enthusiast who loves to set new bars for herself every now and then. The reason we are saying this is because the actress, on Sunday evening, posted a video of herself lifting 70 kgs of weights in a gym and left her friends and fans amazed. The video also features Disha completing 3 sets of hip thrust by lifting 30 kgs. Sharing the video, Disha Patani wrote: “Some of my favourite go-to exercises.” Disha’s rumoured boyfriend Tiger Shroff’s mother Ayesha was all praise for the actress in the comments section. “Woah, Deshuu,” she wrote while actress Elli AvrRam commented: “Damnnnn Disha!” Disha Patani’s sister Khushbu also left a comment that read: “Damn! Burning sensation.”

Disha Patani’s workout videos often inspire us to burn those extra calories daily. Celebrating 40 million followers on Instagram last year, she shared this video of herself lifting 60 Kgs with ease.

Meanwhile, check out some more videos of the actress sweating it out in gym:

In terms of work, Disha Patani made her acting debut with the 2015 Telugu film Loafer, in which she featured alongside Varun Tej. She made her debut in Bollywood with Neeraj Pandey’s 2016 sports biopic M.S. Dhoni: The Untold Story. She shared screen space with late actor Sushant Singh Rajput in the film.

Disha went on to feature in films like Baaghi 2, Bharat and Malang. She has also appeared in 2017’s Chinese film Kung Fu Yoga alongside Jackie Chan.

Disha Patani will next be seen in Salman Khan’s Radhe: Your Most Wanted Bhai. The film will open in theatres on Eid this year. The actress also has Ek Villain Returns lined up.