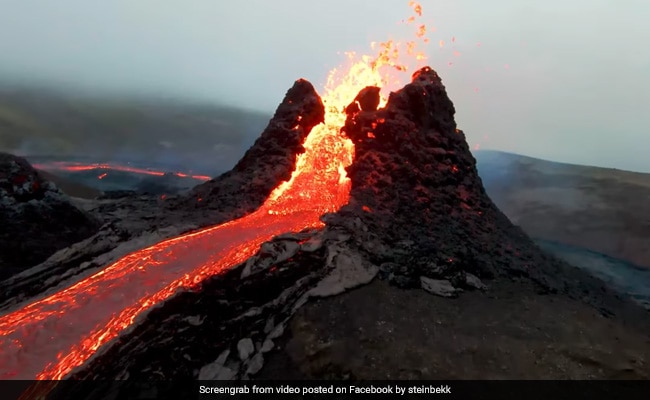 A drone has captured incredible footage of a volcano erupting from a dangerously close distance. The Fagradalsfjall volcano eruption had red lava spewing out of the ground and a crimson glow lighting up the night sky near Iceland’s capital Reykjavik on Friday night.

According to CNET, it was an eruption that Icelanders had been expecting for several weeks. It did not cause any injuries or major disruptions.

Bjorn Steinbekk, who defines himself on his YouTube channel as “a guy with a drone”, managed to  capture stunning footage of the volcano spewing red lava by flying his drone extremely close to Fagradalsfjall.

Volcanic eruptions in the region are known as effusive eruptions, where lava flows steadily out of the ground, as opposed to explosive ones which spew ash clouds high into the sky.

He posted the footage on Facebook, where it has been ‘shared’ nearly 6,000 times and has collected a ton of amazed reactions.

“Amazing. Thank you,” wrote one person in the comments section, while another said, “What a brilliant drone.”

According to news agency AFP, the Krysuvik volcanic system, which does not have a central volcano, is located south of Mount Fagradalsfjall on the Reykjanes peninsula in southwestern Iceland.

The Krysuvik volcanic system has been inactive for the past 900 years, according to the IMO, while the last eruption on the Reykjanes peninsula dates back almost 800 years, to 1240.

Iceland has 32 volcanic systems currently considered active, the highest number in Europe. The country has had an eruption every five years on average.