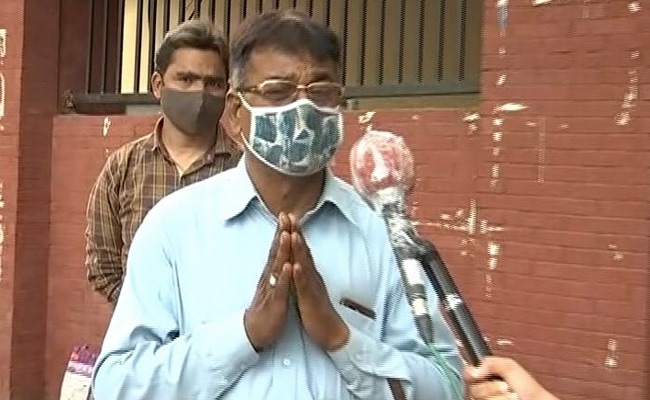 As the ferocious second wave of coronavirus afflicts India, grieving families of patients gasp for a bed and breath at hospitals.

The escalating crisis has left several states with an acute shortage of oxygen and hospital beds. Families of patients, camping outside hospitals, have also cited problems with the treatment provided as overburdened staff struggle to cope.

Delhi, which reported its biggest single-day spike on Tuesday with over 28,000 infections, is struggling to provide proper medical treatment to critical patients.

At the city’s Rajiv Gandhi Hospital, a woman says she had to plead with folded hands for a bed for her mother.

“I had to plead for a bed with folded hands for my mother at night. I want to ask (Prime Minister) Modi ji, I want to ask (Home Minister) Amit Shah ji, they are campaigning in Bengal… Are they not seeing patients are dying here?” Ms Sadhana told NDTV.

Suraj and Deepak Singh, could not say a final goodbye on a video call to their father. After failing to get admission in four hospitals, their father was taken to Rajiv Gandhi Hospital. After not hearing from the hospital for three days, the brothers were informed about their father’s death.

“I had to beg and plead for my father’s admission and now he is no more. I went to at least 3-4 hospitals, he couldn’t be admitted anywhere. Then I came here (Rajiv Gandhi Hospital) and was waiting in the ambulance for four hours. Finally, a senior came out, they took him inside and for the next three days we didn’t hear anything from them. Today, when I came to the hospital at 8 am and requested to do a video call they told me there is an internet issue. By noon they informed me he is no more,” Mr Singh told NDTV.

Monu, whose mother is currently admitted in a Covid dedicated hospital, told NDTV: “There is complete laxity in patient care. There is no one to take care of the patient, give them medicine or feed them. I came here on Sunday evening, and I have seen that anyone who is going in is not coming out fine or alive.”

After an acute oxygen shortage in Delhi hospitals was flagged in court and through appeals by politicians, including Chief Minister Arvind Kejriwal, some of the city’s biggest medical facilities received a late-night refill yesterday. Oxygen tankers arrived late on Tuesday at some of these places, including Sir Ganga Ram Hospital and Guru Teg Bahadur (GTB) Hospital, which were merely hours away from running out of stock.

The capital is the worst-hit by the rapid second wave of infections and logged 277 deaths on Tuesday, its highest ever since the outbreak. To tackle the crisis, Mr Kejriwal has announced a six-day lockdown till Monday morning.