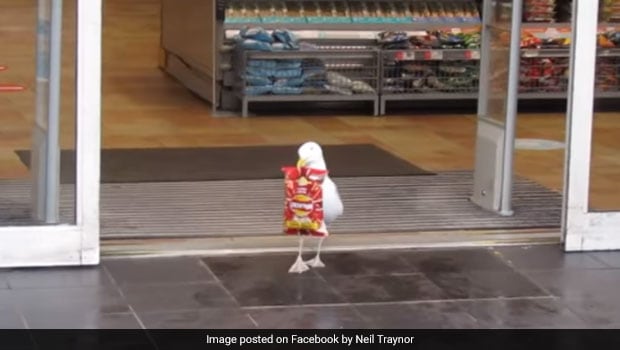 The video of seagull stealing food is too funny too miss.

This has to be the cutest shoplifter you’d ever see. In an astonishing yet hilarious video, a seagull is seen stealing a bag of chips from a superstore in Aberdeen. The whole act of theft was captured on camera and shared on Facebook, which amused everyone who saw it. The neat way the seagull enters the store and does its job can give any professional thief a run for his money. This is probably the only crime video that has people going ‘wow’ with amazement.

In the video clip, a seagull can be seen lurking outside a store, probably trying to figure out a way to enter. Once the automatic door opens by a customer passing by, it grabs the opportunity to enter sneakily. It goes straight for the kill – a bag of chips – and swiftly walks out, seemingly after realising how the automatic door works with sensors.

The ending of the video is what surprised us the most. As soon as the bird steps out of the store with the snack, it drops the pack on the floor and punches it with its sharp beak a few times to rip it open. Once it makes a whole in the pack, it wastes no time in noshing on the salty chips.

The video was shared on a Facebook group page ‘ABERDEEN IN COLOUR’ by one Neil Traynor and has left the viewers in splits. The video was captioned with “Gulls don’t care for the concept of ownership or trade” and has clocked in 2.6 likes and has been re-shared more than 6k times so far.

Comments like ‘Mr sea Gull is well known to solicitors of the city!!!”, “That automatic door never works for me, but works for a seagull???” and “Knew what he was wanting and doing haha” will further light up your mood.

About Neha GroverLove for reading roused her writing instincts. Neha is guilty of having a deep-set fixation with anything caffeinated. When she is not pouring out her nest of thoughts onto the screen, you can see her reading while sipping on coffee.