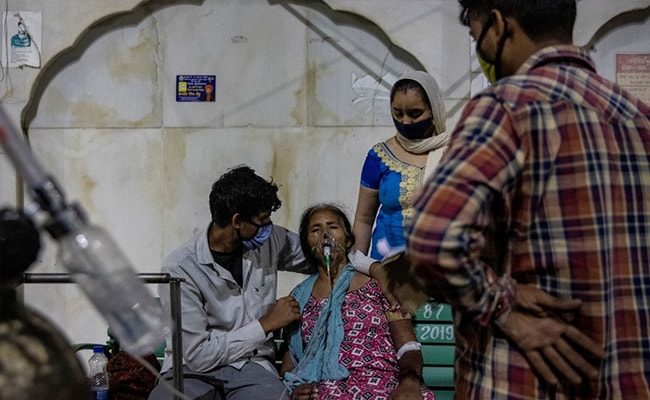 Coronavirus patient Vidhya Devi, 70, should have been in emergency care at a New Delhi hospital, but instead she lay on the backseat of a car outside a Sikh temple, battling for breath, as she was connected to an oxygen tank on the street.

A massive surge in COVID-19 cases in India, which set a new global record of the most number of infections in a day on Sunday, has left many infected people struggling to find treatment, with hospitals overcrowded and many running out of oxygen.

At the Sikh gurudwara (temple) in Ghaziabad city on the outskirts of the capital Delhi, the humanitarian tragedy is visible on the street.

Sikh aid group Khalsa Help International has been buying small quantities of oxygen as and when it becomes available to help those in urgent need.

Cars, vans and rickshaws plying COVID-19 patients and their families choked the street outside the temple on Saturday, as volunteers holding black oxygen cylinders spread out to help.

“I came here because I didn’t get help anywhere else,” said Manoj Kumar, who sat next to his mother Devi in the car as a volunteer monitored the flow of oxygen from the tank to her masked mouth.

“I called the gurudwara and they asked me to reach here fast,” said Kumar.

A middle-aged woman in a van appeared to be palpitating as her adult son, holding her arm tried to keep her conscious, calling out: “Mummy? Mummy?”

In another van, a man lay unconscious on a car seat, legs stretching out of the door, as one volunteer vigorously rubbed his feet, while another pumped his chest to try to revive him.

Rummy, who is president of the gurudwara and founder of Khalsa Help International, said he began providing the service three days ago as cases started spiking in New Delhi.

“People are dying on the streets. That’s why we started this,” said Rummy.

Over 36 hours up to Saturday evening, Rummy estimates the Khalsa Help International group has saved around 700 patients, but some didn’t survive.

As breathless patients arrived seeking oxygen, the street outside the temple resembled the emergency ward of a hospital, but crammed with cars not bed trolleys.

Rummy called out to those gathering, requesting them to disperse.

“Please remove the cars from the middle of the roads. Please keep to one lane,” he said.

“You will all get oxygen.”