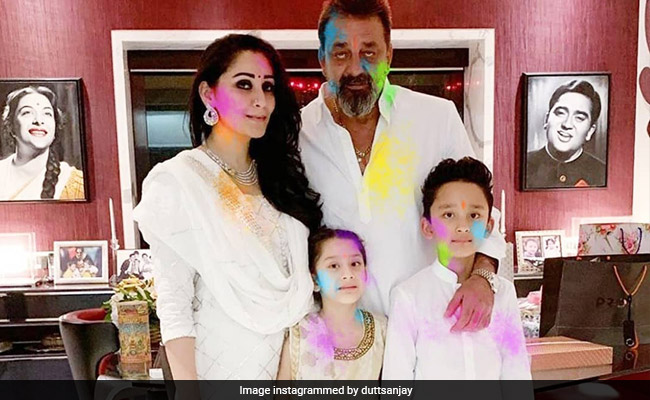 Sanjay Dutt sent Holi greetings on Instagram this morning. The picture-perfect post features the actor along with his family members. The actor, who is celebrating the festival of colours at his home, posted a picture with wife Maanayata and twins Iqra and Shahraan. The picture features all of them dressed in white and with colours on their faces. Sanjay Dutt, in his caption, asked his fans to stay safe this year, given the COVID-19 pandemic situation. The actor wrote in his caption: “Keep the celebrations at home this year for the safety of your loved ones.” He signed off saying, “Wishing you all a very happy Holi.”

The actor frequently delights his Instafam with posts featuring his fam-jam sessions. Check out some of the posts featuring Sanjay Dutt along with Maanayata and twins Iqra and Shahraan here:

Sanjay Dutt married Maanayata in the year 2008  and the couple are parents to 10-year-old twins Shahraan and Iqra. The actor was earlier married to Richa Sharma, who died of brain tumour in 1996, with whom he has daughter Trishala. She stays with her grandparents in the Unites States Of America.