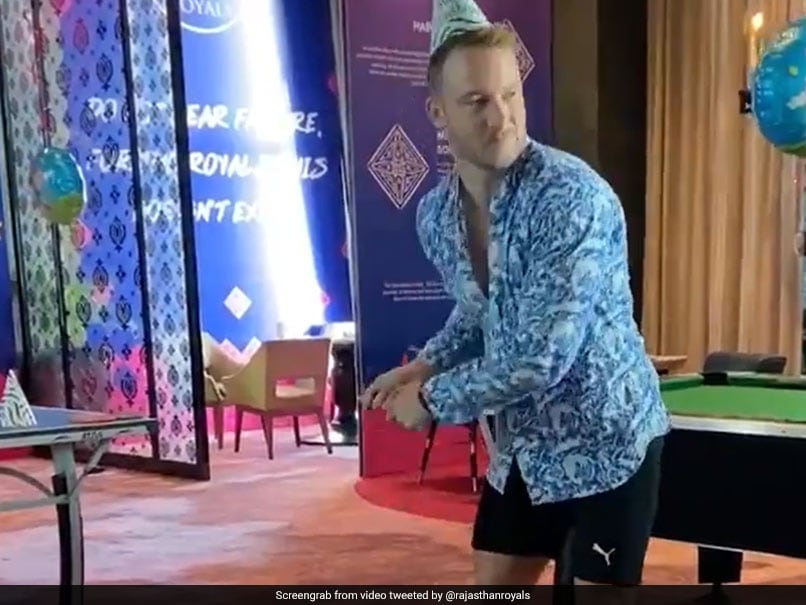 
Rajasthan Royals’ middle-order batsman David Miller, on Tuesday, hilariously imitated his Indian Premier League (IPL) teammate Jos Buttler’s batting stance. Miller imitated Buttler during the birthday party of Georgia, Buttler’s daughter. The clip was shared on the Rajasthan Royals‘ official Twitter handle. In the video, Miller’s teammates and coaching staff can be seen applauding his mimicry of their wicket-keeper batsman. Miller’s impression of Buttler was so on point that even the English cricketer was seen chuckling and heard saying, “Very good, David”. “Presenting David Miller… as Jos Buttler!” Rajasthan Royals had captioned the video.

The post received over 5,000 ‘likes’. Fans of the Royals were also impressed by Miller’s acting talent and showed their appreciation in the comment section.

“Such a good environment in the team. That’s what we want. Happy Birthday cutie,” wrote another supporter of the team.

Such good environment in team that what we want. Cutie happy birthday

Even though Rajasthan Royals has won just one of their opening three games, the mood in the camp seemed upbeat as they celebrated Georgia’s second birthday.

Rajasthan will next take on Royal Challengers Bangalore (RCB) on Thursday in Mumbai. RCB are unbeaten after three games. On the other hand, Rajasthan will look to go back to winning ways after losing their last game to Chennai Super Kings.

While the Virat Kohli-led RCB are leading the IPL table with three wins from as many games, Rajasthan are placed at the sixth spot with two points.