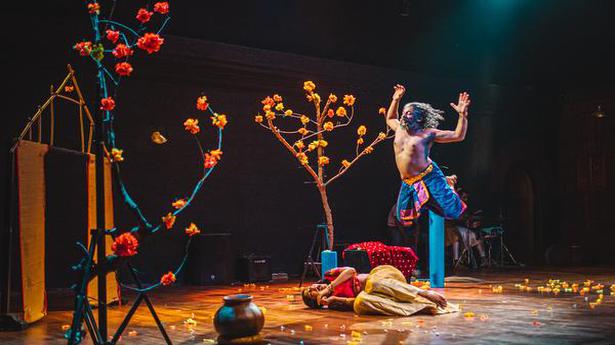 Layer by layer, the play shifts planes, changing mood and tone, throwing up questions that demand answers, problems that demand a solution

Utsav met Damini, or in theatre terms, Rabindranath Tagore met Vijay Tendulkar on stage on April 10, when Adishakti Theatre Arts opened its latest play, Bhoomi, to launch the Remembering Veenapani Festival 2021. Directed by Vinay Kumar, who also created the musical pieces, the play weaves together mythology and reality, past and present, humour and anger, to create a pattern quite distinct from what one has come to expect from Adishakti.

A song and dance sequence that’s strongly reminiscent of the dance dramas of Shantiniketan unwraps the story as it moves between two young women from different time frames, both of whom are victims of a king’s depraved lust. The Ramayana story of Araja, daughter of Shukracharya, lies at the heart of this debate on rape. When the power-drunk king Dandaka sees the innocent maiden, decked in flowers, singing to herself and communicating with the trees and flowers, he does what depraved men do; pounces on her and, despite her attempts to free herself, rapes her savagely to leave her bruised and bleeding. Her sorry state enrages her father, Shukracharya, who curses her tormentor so that the once beautiful forest that was part of his kingdom, and indeed his kingdom itself, is ravaged by a raging fire and dust storms that cover and annihilate it completely.

If the pretty dancing and lilting music interspersed through the telling of this story seem like a balm being offered to soothe an audience ravaged by the effects of a pandemic that shows no sign of easing up, there are surprises in store. Like a babushka doll revealing its secrets, layer by layer, the play shifts planes, changing mood and tone, throwing up questions that demand answers, problems that demand a solution.

Almost all of Adishakti’s offerings have dealt with contemporary issues, despite their being based on stories and characters from the epics. Bhoomi takes on the challenge of speaking up for the victim of sexual violence in a dialogue between two actors, women in the real world, who stand at different points in their personal journeys. It is at this point that Bhoomi comes into its own, entering strongly into the space that Veenapani Chawla created and wished her actors to occupy and vocalise in their own ways. The tension created is palpable, and the web closes in, drawing the audience tighter into its grasp, as the actors’ body language and stances change, and the layers of self deception and imposed silence that conceal acts of violence from coming into the open are revealed.

The past is replete with stories that spur violence; even in some ways condone it. The present needs new narratives. Bhoomi leans on Sarah Joseph’s Malayalam play, Bhoomirakshasam, to present this premise.

Adishakti used the self imposed year-long lockdown to work on Bhoomi, and the hard work shows in the fact that the actors extend themselves to singing, playing diverse instruments and dancing even as they assume different roles with ease.

The Remembering Veenapani Festival will, in view of the changed state of things, continue through the year, with performances by participating groups spaced out over the coming months.

The reviewer is former editor of Femina.