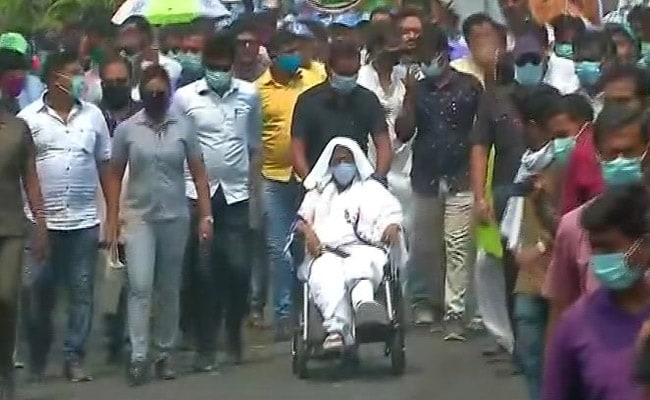 In the midst of a fierce election campaign in Bengal, Chief Minister Mamata Banerjee – injured earlier this month – held a roadshow in wheelchair in high-stakes Nandigram, which votes in the second phase of the state elections.

An eight-km roadshow was held in Nandigram followed by a public meeting as the nation celebrates Holi.

On Thursday, Nandigram will see a high-profile battle between Ms Banerjee and her former aide Suvendu Adhikari, now with the BJP; poll campaigning will soon end in the constituency.

In a video posted by the Trinamool Congress on Facebook, the West Bengal Chief Minister, in wheelchair, was seen greeting crowds with folded hands as party workers – carrying flags – accompanied her.

Earlier this month, the 66-year-old Trinamool Congress chief was injured; she said was pushed by four or five people against her car and had the door shut on her at a time when there was no police personnel around her.

Amid accusations by the ruling party and scathing counter-attacks by the BJP, which is trying to claim victory for the first time in the state, the Election Commission suspended a police officer who was in charge of the Chief Minister’s Security.