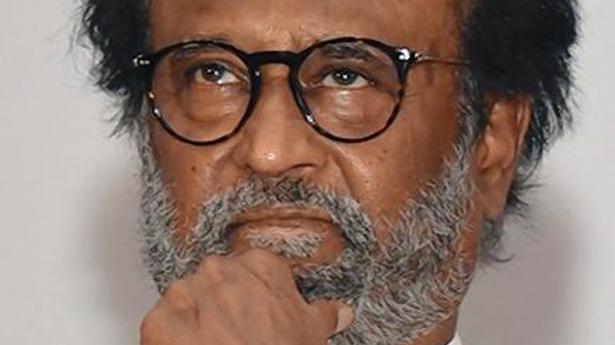 After meeting families of the victims of police firing and violence, the actor had told journalists that the infiltration of anti-social elements had led to violence

Tamil superstar Rajinikanth has told a commission of inquiry that he does not have any evidence to substantiate his charge that anti-social elements had indulged in violence during the protest demanding closure of the Sterlite copper smelter here on May 22, 2018.

Thirteen persons were killed in police firing during a march taken out to the Collectorate.

In an affidavit submitted through his lawyer to the Justice Aruna Jegadeesan Commission of Inquiry into the police firing, the actor said he did not have any documentary evidence to prove his claim.

After meeting families of the victims of police firing and violence, Mr. Rajinikanth had told journalists that the infiltration of anti-social elements had led to violence.

Arul Vadivel Sekar, lawyer for the commission, told journalists on Thursday that Mr. Rajinikanth, in response to the summons, had sought permission to respond to a questionnaire. On receiving the questions, he submitted his reply.

“In his reply, he stated that his address to the media after visiting the victims at the Thoothukudi Medical College and Hospital was an unscheduled one, and he had no documentary evidence to prove his assertion that the intrusion of anti-social elements into the rally had caused violence and arson,” he said.

The commission would summon the actor to get “a few more clarifications” based on his reply.

The commission had summoned Mr. Rajinikanth to share evidence. The actor did not turn up before the commission on a few occasions, contending that his appearance would cause hardship to the people. Later, he cited COVID-19 for his inability to depose.

Mr. Sekar said 48 persons deposed at the 27th sitting held between April 19 and 22. So far, 719 of the 1,052 people summoned had appeared before the commission. The policemen on security duty during the rally, the policemen injured in the violence and government officials, including the then Collector, would be summoned for the next sitting to be held between May 17 and 21, he said.