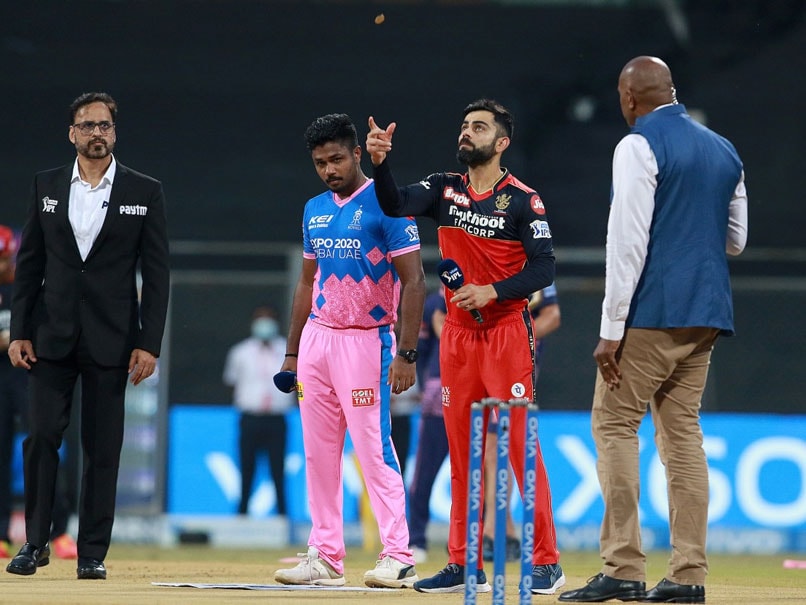 
Virat Kohli and Sanju Samson shared a hilarious moment before Match 16 of the ongoing Indian Premier League (IPL) 2021 season. Royal Challengers Bangalore (RCB), who are unbeaten this year, are currently up against Rajasthan Royals (RR), at the Wankhede Stadium on Thursday. The epic moment occurred during the toss, when RCB captain Virat Kohli didn’t realize that he won it. After the coin was tossed, Kohli stepped back for Sanju Samson to make the decision. It was only after a few seconds, that Kohli realized that he had won the toss, which left Samson and Ian Bishop, who was conducting it, in splits.

“I’m not used to winning tosses,” quipped Kohli, before saying that they would bowl first.

“I’m not used to winning tosses” @imVkohli #RCB have the toss and they will bowl first against #RR #VIVOIPL pic.twitter.com/a0bX6JNGak

Currently in second position, a win will be enough to send RCB back to pole position in the IPL 2021 points table. Chennai Super Kings (CSK) are currently on top of the table, level on points with RCB but with a better net run rate. CSK have also played in four matches, compared to RCB’s three.

On the other hand, Rajasthan are seventh in the eight-team table after three matches. RR will be hoping for more consistency in their ongoing campaign.

During the ongoing match, all eyes will be on Glenn Maxwell, who silenced his critics this year. Known to be IPL’s perpetual underperformer, the Australian all-rounder has put in match-winning displays for RCB this season.

Currently second in the Orange Cap race, Maxwell has scored 176 runs in three matches, with a high score of 78. The Aussie cricketer hasn’t really been able to showcase his abilities with the ball due to limited opportunities.