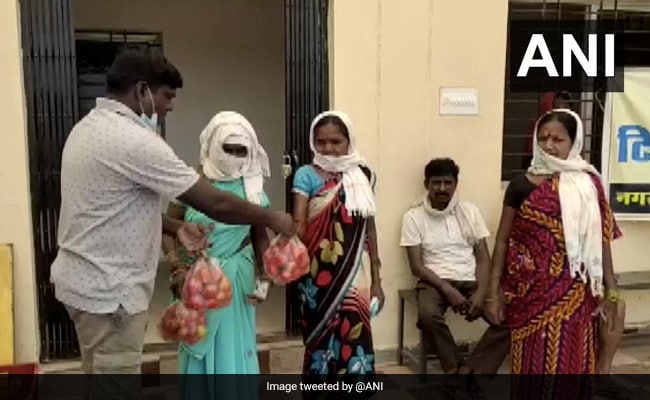 As coronavirus cases in India see an unprecedented surge, experts and the government say that one of the ways to stay ahead of the curve is through vaccination. While several states have issued public service announcements urging people to get themselves vaccinated, a municipality in Chhattisgarh has come up with a unique strategy to encourage citizens to get the shot.

Bijapur residents are being offered tomatoes as an ecouragement to take the COVID-19 vaccine, news agency ANI reported and shared photographs on Twitter.

Women are seen getting packets of tomatoes as they step out of a medical centre, possibly after vaccination.

The barter system of sorts was an effort to “encourage” locals to get inoculated, an official said.

“It’s being done to encourage them. We appealed to vegetable vendors, they supplied to the municipality,” Purshottam Sallur was quoted as saying.

Chhattisgarh: Tomatoes being offered to people in Bijapur Municipal limits, by Municipality, to encourage them to get vaccinated for #COVID19. An official, Purshottam Sallur says, “It’s being done to encourage them. We appealed to vegetable vendors, they supplied to municipality” pic.twitter.com/3LHPKfm6Mr

Several users on Twitter seemed to be impressed with the idea. One user felt that the move could be emulated by the government as well.

Another user wrote that the move was appreciated.

Hats off to the person who started this idea..

I know for free Tomatoes people will come like honeybee ( Even my family goes to shops which offer something free) so appreciate this move .

The central government has announced that vaccination will be open to all those above the age of 18 from May 1. Following a series of meetings by Prime Minister Narendra Modi, the government said that states can buy doses directly from vaccine makers. It also said that the Centre would allocate vaccines from its share to states or union territories on the basis of its caseload.

PM Modi reiterated in his meetings that vaccination was the most reliable way forward. “The government has been working hard for over a year to ensure that maximum numbers of Indians are able to get the vaccine in the shortest possible time,” he said.

With over 2.59 lakh new COVID-19 cases in the last 24 hours, COVID-19 continues its onslaught across the country. India is second only to the United States in terms of total cases with 1.53 crore infections.