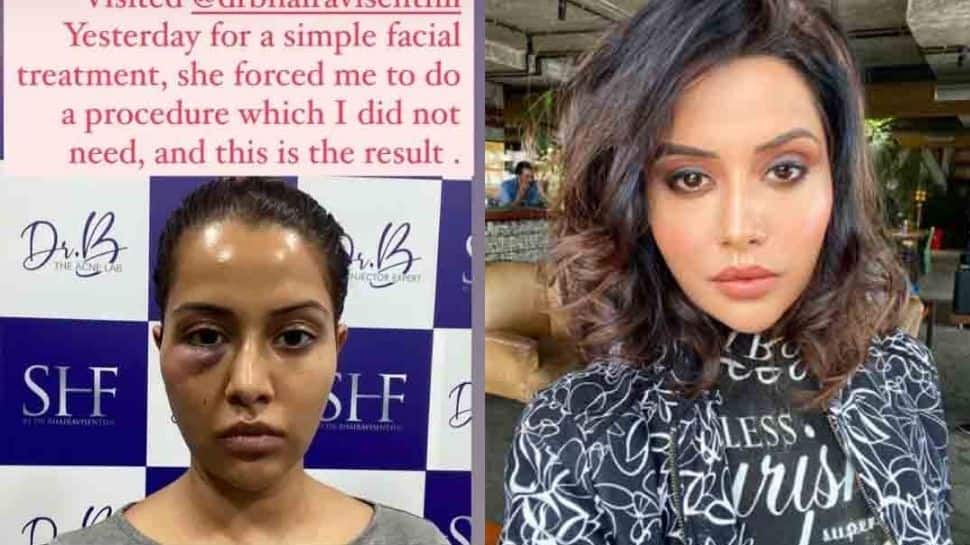 New Delhi: A week after Tamil actress Raiza Wilson posted the shocking picture of her cosmetic procedure gone wrong on Instagram, she shared a follow-up on the pressing issue with her fans.

On Saturday (April 24), Raiza took to Instagram to post a picture of a letter describing the traumatizing ordeal of her medical procedure and that she has decided to take legal action against her dermatologist.

She alleged that her dermatologist, Dr. Bhairavi Senthil was negligent and denied emergency treatment to her in time of need.

She wrote, “I approached Dr. Bhairavi Senthil based on her advertisement on various social platforms to perform certain cosmetology procedures. I have suggested wrong treatments by Dr Bhairavi Senthil and her staff from the beginning of the consultation only to extort money.

“Also, I have been denied emergency treatment by Dr Bhairavi Senthil while my life was at threat due to their procedure. The shreds of evidence available to me (including a doctor examination) clearly shows that I am a victim of a wrongful procedure conducted by Dr Bhairavi Senthil. Hence an apology is ‘Untoward,” she continued.

Further, she told her fans that she has initiated a complaint against the Dermatologist and submitted it to the National Medical Commission and Tamil Nadu Medical Council.

She informed her fans, “I am a victim of a negligent act caused by Dr Bhairavi Senthil and staff. In future, no one should undergo the pain I experienced. Being an actor, I consider myself responsible for my actions to the society.

“Hence to ensure that further no innocent people are affected by Dr Bhairavi Senthil service, I have initiated a complaint before the National Medical Commission and Tamil Nadu Medical Council against Dr Bhairavi Senthil and others for conducting an investigation in due course of law, and I hope the decision of the authority would be revealed after investigation,”she said.

Elaborating on the legal proceedings, she wrote, “Finally, I initiated a legal proceeding claiming ‘One Crore’ as damages from Dr Bhairavi Senthil for deficiency in her service. In due course of the said legal proceeding, any damages awarded in favour of me would be donated to ‘Victims of Medical Negligence. With faith in God and Hope in the Judiciary, I pray that people should always be provided with the best medical services.”

Have a look at the letter she posted:

Raiza’s new post came as a follow-up to her previous Instagram story where she showed before and after pictures of her cosmetic procedure.

In the picture, Raiza can be seen with swelling under her eye area after the dermatological procedure.

After Raiza shared the shocking picture, it went viral on the internet. Owing to the traction it had gained, Dr Bhairavi, the accused, issued an official statement on the controversy.

The doctor completely denied the allegations put forth by Raiza and claimed that the actress’s statement was derogatory and has grossly affected her brand.

Have a look at her statement:

Raiza is a popular Tamil actor who made her acting debut in 2017 with a small role in ‘Velaiilla Pattadhari 2’. A year later, she appeared in ‘Pyaar Prema Kaadhal’ where she shared the screen space with Harish Kalyan. She won the Filmfare Award for Best Female Debut – South for her performance.

She made her OTT debut with ‘Varmaa’ in 2020. Her upcoming projects include The Chase, Alice, Kadhalikka Yarumillai, F. I. R. and Hashtag Love. She was also one of the most popular contestants in the first season of ‘Bigg Boss Tamil’ hosted by Kamal Haasan. She also made a guest appearance in the second season of the controversial reality show.

Raiza has a number of films in her kitty, including ‘Alice’, ‘Kadhalikka Yarumillai’ and ‘Hashtag Love’.