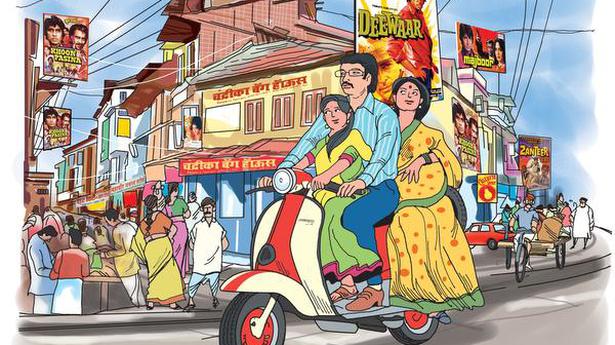 In the latter half of 1982, when my father was living in the copper factory township of Moubhandar (about 5 km from Ghatsila in Jharkhand) and my mother was pregnant, my father took her and my pishi (aunt) on his Lambretta scooter (which he, like many others, called Lambi) to watch a film. They went to a cinema hall in Mosaboni, where the copper company had its mines and which was about 13 km from Moubhandar.

It was a different time, the 1980s. Even simple TV sets were a luxury for many. Small, quaint industrial townships — tucked away in the hinterland, surrounded by hills and forests, with a river or two running through — had a charm of their own. The bustle and twinkling glamour of the small bazaars of Moubhandar and Mosaboni outshone the fact that the road between the two townships was totally dark and practically deserted after sundown.

The four places my father frequented for his filmy fix were the workers’ cinema club in Mosaboni, for the highbrow stuff; the cinema hall in Mosaboni and one on the outskirts of Moubhandar for regular Hindi and Bengali movies; and the open-air shows organised for workers in a community space in Moubhandar.

There was one cinema hall in the Ghatsila area which, after staying closed for a long time, reopened in 1995 with shows of the Govinda-Karisma starrer Coolie No.1. But I don’t remember my father ever going there to watch a film, although he was invited to the reopening. My father attended the event but left before Coolie No. 1 began. Four years later, after my Class X boards, I went to that flea pit to watch Titanic, a year after its release in India. I want to but won’t write about the all-male audience’s reaction to Rose and Jack’s jalopy rendezvous. The film was in English, neither dubbed nor subtitled, and yet the hall was packed.

When I was almost in my teens, during one of our random conversations, my pishi told me: “Your father took your mother and me to watch a film in Mosaboni. Your mother was pregnant with you at that time.” It was just a small anecdote and I could have easily forgotten it. But perhaps because it was also about me (I was in my mother’s womb as she watched the film) and because I eventually came to love films so much, my instant reaction was curiosity. Which film was it?

I wondered how my father had managed to carry himself, his pregnant wife and his sister on a Lambi and ride 13 km and back for a film. My family, however, had quite forgotten the movie in question. The only thing they remembered was that it had starred Amitabh Bachchan and Parveen Babi.

So, I googled ‘amitabh bachchan parveen babi film 1982’. Three results came up: Desh Premee, Namak Halaal and Khud-Daar. I used logic. In Desh Premee and Namak Halaal, Bachchan was paired opposite Hema Malini (also Sharmila Tagore) and Smita Patil, so they were out. In Desh Premee, since Babi only played Bachchan’s daughter and sister, respectively, I decided my family would more likely have remembered Hema Malini who played the heroine than Babi. In Namak Halaal, Smita Patil was Bachchan’s heroine while Babi was paired opposite Shashi Kapoor, so that was ruled out too. I concluded that it was most likely Khud-Daar that my family had watched with me the silent fourth.

Those days, it took films at least a month, sometimes more, to reach a small town like ours. Titanic took more than a year to come to our Ghatsila cinema hall. The movie would play on for a month or more in the same hall depending on the response. And when a film ran houseful, benches would be brought in hurriedly to accommodate the last-minute buyers of fought-over tickets. I saw Dilwale Dulhania Le Jayenge (DDLJ) and Raja Hindustani (RH) on makeshift seats in the hall on the outskirts of Moubhandar.

To the 38-year-old me today, making so much effort to watch a movie seems excessive, but to the 12- or 13-year-old me, it was pure thrill. In 1997, Uphaar Cinema caught fire, but the movie-going experience in rural and semi-rural areas did not change. In

2000, I was returning home from Physics tuition when I encountered, outside the same cinema hall where I had watched DDLJ and RH, maybe a hundred people walking towards me and an almost equal number going in the other direction. Most of them on foot, many on bicycles, a fair number on motorcycles, all looking visibly happy and excited. They were exiting the hall after catching the matinee show of Kaho Naa… Pyaar Hai.

In those days, when a Hindi film ran for 25 weeks, it made to the front page of local newspapers. We read about Maine Pyar Kiya’s silverjubilee run on the first page of a Hindi daily. Conversely, films that flopped were pulled out in less than a week. Wikipedia tells me Khud-Daar was released on July 30, 1982. I am guessing it might have reached Mosaboni a month or so later.

Somehow, the name Parveen Babi struck a chord with me right from childhood. I was already a fan of her seductive ‘Oho’ from the ‘Jawaani Jaaneman’ song in Namak Halaal since I had first heard it on a T-Series audio cassette titled Disco Nasha when I was 5 or 6. And then when I discovered that it was a Parveen Babi film that my family and I, indirectly, had gone to watch, it added to the fascination the ‘Oho’ had generated.

There is one more reason. Again from childhood. When I recently read Karishma Upadhyay’s biography, Parveen Babi: A Life, I learnt that the actor had quit working in films by 1990-91. I must have been around 8 or 9 at the time. I had encountered a comic strip in one of the many Hindi humour magazines that used to be published in the 90s.

It showed a reporter trying to interview Babi. Her caricature wore a long, white, full-sleeved dress (which seems to have become one of Babi’s most recognisable outfits) with her hair loose (as in her films and popular memory). She was depicted angrily chasing the reporter away through a forest with a gun in her hands.

A particular word was used to describe Babi — I am not sure whether I encountered it in that particular magazine or somewhere else — neem paagal — suggesting a crackpot, an eccentric. As I grew older and watched many of Babi’s films, even Khud-Daar, I wondered what she had done to deserve that epithet.

For years, I was disturbed by that derisive word used to describe her. Then Upadhyay’s book came along and in it the actor comes across as an intelligent and sensitive person. Upadhyay has put together the pieces of Babi’s life from various reports, interviews, and a long piece that Babi wrote about herself. At one place, Upadhyay mentions Babi telling Stardust magazine: “Look, there’s no shame in poverty. If I had been down and out, why would I deny it?” It broke my heart a little. Babi’s statement is so beautifully honest even by today’s standards.

I found the parts about Babi’s reconciliation with her mother towards the end of their lives particularly poignant. “They had no choice [except being “politely indifferent to each other”]; they had no one else in their lives,” Upadhyay writes. Despite all the differences a child might have with their parents, there comes a time, usually after the death of one parent, when they yearn to return to the surviving parent, who seems to accept them just as they are. This is not just true of a star but of everyone.

Babi went into self-exile in the U.S. in the late 1980s. Back home in Junagadh, Gujarat, her mother, her only surviving parent, had had no news of her for three years and “had almost begun to believe that her daughter was dead.” “[Babi’s mother’s] first reaction was that of relief” when they met again. Even as I tried imagining the mother’s joy, I felt something crumbling inside me.

How easy or difficult is it for a person to leave everything and just disappear? Especially when that person is meticulous and successful, like Babi was. Where do they go and what do they do? What if they want to return? Would I be able to leave, dropping everything, if I chose to? What happens if leaving does not give me what I had expected to find? What would I do then? Would returning be easy?

A lot of whats. Leaving is a matter of thousands of questions and doubts that perhaps don’t have any answers.

A friend once said: “How sad to die all alone, like Parveen Babi.” There are so many people who live and die alone. Why did my friend think of Babi? Was it because she was a public figure whose lonely death had received much media attention? I felt that it was not just a lonely death my friend was wary of. It was loneliness itself.

Reading Upadhyay’s book on Babi was like having layers of mist cleared from my mind. If only someone would go back in time and replace the word neem paagal with something kinder. Something that implies acceptance of difference, of people not like us. A phrase that would tell them they can stay even if they are different; that they will be safe. Something that would welcome them when they return.

The writer’s last book was Sumi Budhi and Sugi, with illustrations by Joanna Mendes.