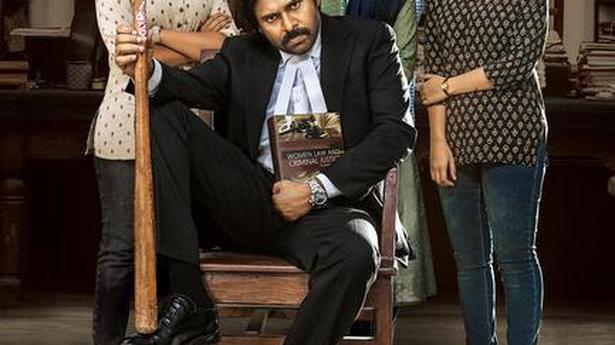 ‘Now the people need you’ (‘Ippudu janalaki nuvvu kaavali’), Satyadev (Pawan Kalyan) better known as ‘vakeel saab’ is told in the film. What he does next might make or break a case involving three women. But more than that, the statement acknowledges the star who is a politician in real life, and plays an on-screen saviour of the masses. Pawan Kalyan’s stardom and political aspirations dictate how director Sriram Venu adapts the critically-acclaimed Hindi film Pink (2016) into Telugu.

Sriram Venu packs in mass elements — stunt sequences and episodes of the hero saving the downtrodden — but also stays true to the source material of Pink and gets the hero to deliver the much-needed ‘no means no’ messaging effectively. That’s a big win.

A woman’s line of defence in a sexual harassment case is often countered with questions about her clothes, why she was out late night, does she drink, does she have a boyfriend… the list goes on. Amitabh Bachchan in Pink and Ajith in the Tamil remake Nerkonda Paarvai (2019) were the star conduits to highlight these issues through a hard-hitting satirical ‘safety manual’ and emphasise that women using their freedom to work, navigate the city at night or do anything that challenges staid notions of patriarchy aren’t sitting ducks for sexual assault.

The courtroom face off between Pawan Kalyan and Prakash Raj (as prosecution lawyer Nanda) are the best portions of Vakeel Saab. In fact, the film shines when it stays focussed on the stories of the three women and the predicament they are caught in.

The ‘mass’y deviations and the flashback involving Shruti Haasan are deterrents, since the writing and narration have nothing innovative in these segments. The only takeaway lies in showing what made Satyadev study law, and his tendency for activism during his university days.

We get a rooted, region spin on the three women. Pallavi (Nivetha Thomas) who chooses to live on her own, closer to her IT workplace, Zareena (Anjali) as the breadwinner of her family based in Rajahmundry and Divya (Ananya) who hails from a tribal region in Telangana and works as a mehndi artist in Hyderabad are representative of several thousands of women with dreams of a career, financial independence, and much more.

They are stranded in the middle of nowhere at night after their cab driver suspiciously remarks of a breakdown. Hope comes in the form of a car passing by, in which one of them is known to the girls (the narrative underlining that perpetrators could be from known circles too). But soon, things go awry. If you’ve seen Pink, you know it. If you haven’t, Vakeel Saab does a good enough job of appropriating it to the regional context and showing why women caught in such situations need justice and not character assassination, which is inevitably followed by clipping of their wings.

The women — Nivetha, Anjali and Ananya — are remarkable. Nivetha and Ananya in particular internalise and convey the mixed feelings of courage, fear and despair effectively. They are excellent in the court debates and even in the scenes where they are in the background without a dialogue, when their eyes well up, they make you tear up too.

Pawan Kalyan saves his best for the courtroom proceedings and the manner in which he takes on a woman cop, addressing her as a ‘superwoman’, brings the hall down. Prakash Raj gets a role that requires him to be truly sinister and he aces it.

A major grouse has to be with the pre-interval portions that try to establish ‘vakeel saab’ as the saviour of people, peppered with fights and slow-motion walks. It’s something we’ve seen in many star-driven films and quite boring. The director also incorporates a few things from Nerkonda Paarvai, but gives it a more masala spin.

But thankfully, once these portions are done with, Sriram Venu steers Vakeel Saab in the right direction.

It might be five years since Pink, but the issues of consent and ‘no means no’ remain relevant, and this starry remake is a good vehicle to make it reach far and wide.