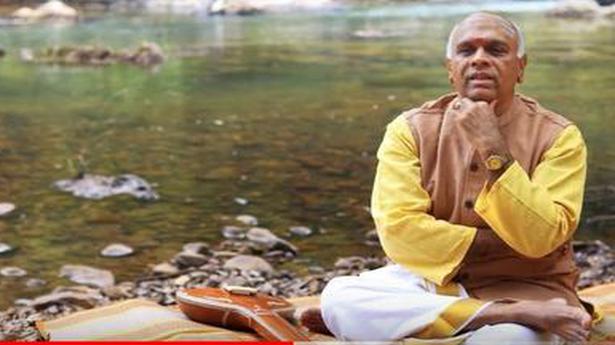 Senior musician N. Vijay Siva recently inaugurated a novel video series titled ‘Vande Sangeetam’ on his YouTube channel. The first episode titled ‘Kaveri Saveri’ sees Vijay sitting by the Kapila River, its pristine waters flowing behind him. He talks of the importance of rivers to civilisation and the fact that many prominent Carnatic composers, Tygaraja, Muthuswami Dikshitar and Syama Sastri, hailed from the banks of the Cauvery, and intersperses the narrative with with informative anecdotes. He then sings Dikshitar’s ‘Kari kalabha mukham,’ a song in Saveri, on the Dundi Ganapati deity located on the shores of the Cauvery in Mayiladuthurai.

Vijay likes to know the word-by-word meanings of the songs he sings. He does not use any mnemonic aids at concerts. In these videos too, he delivers his content without notes, in easily comprehensible English, moving from anecdote to anecdote, switching effortlessly to singing while strumming the tanpura himself. With some 12 episodes filmed over three consecutive days, a lot of effort must have gone in to present an in-depth account in a free-flowing, viewer-friendly format.

A team of five is behind the series — Vijay, two friends who provided instantaneous feedback on site, and the camera crew of Pramod Gokhale (his long-time student) and his wife Akshatha. Aesthetically presented, the videos have been filmed in picturesque settings that catch the viewers’ attention. Pramod and Akshatha scoped out locations, zeroing in on the Mundaje area of South Kanara district in Karnataka. Some locales were hilly and tricky to navigate, even sometimes requiring Vijay to be lowered down carefully with ropes. Pramod and Akshatha handled the introductory graphics, recording and post-production.

Lest we think this is a series about rivers alone, Episode 2, released this Wednesday, is titled ‘Margam Tyagaraja’ and filmed in a lush green farm surrounded by banana saplings. Taking off from how Tyagaraja has an Aradhana all his own, Vijay explains how the composer stands apart from others in being the only one to show musicians how to be professionals in the art form and yet to attain salvation. He sings the relevant compositions of Tyagaraja that illustrate how to produce the voice, how and when to practise, the dos and don’ts, including a little-known fact, that the composer advocated alapana and niraval singing but not kalpanaswarams.

According to the musician, the plan is to release an episode a week for a year or so, time and circumstances permitting. “Once concert schedules get back to normal, the project might become harder to manage.”

The goal, he explains, is to engage with rasikas in a productive manner, sharing information that is relevant not just now but for posterity. The series makes it evident that Vijay Siva has combined his formidable knowledge of compositions with what he has assimilated from books as well as gleaned from interactions with musical stalwarts.

The author writes on classical music and musicians.