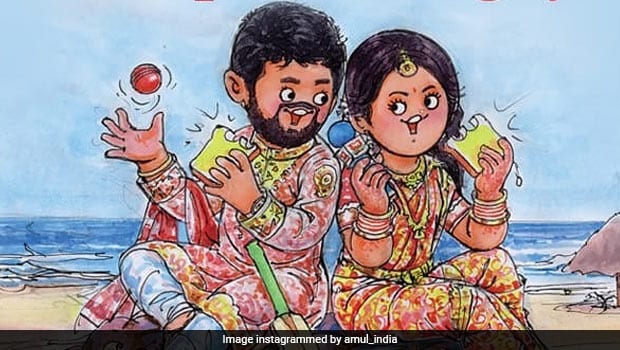 Ace bowler Jasprit Bumrah tied the knot with TV presenter Sanjana Ganesan on 15th March 2021. The wedding was an intimate affair that took place in Goa amidst the presence of close family and friends. The exact details of the ceremonies have been kept under wraps from the media; however, the pictures and videos of the wedding ceremony have been taking social media by storm since the time they have been shared by the happy couple. Congratulatory messages poured in from the Indian cricket team for the duo’s wedding. And now, Amul India too has paid a sweet tribute to celebrate Jasprit Bumrah and Sanjana Ganesan’s wedding. Take a look:

Amul’s quirky topicals and relatable social media posts capture the pulse of the nation like no one else. Fans eagerly await the interesting spin they put to events happening in India and even around the world. And their sweet tribute to Jasprit Bumrah’s wedding was no different! The post has received over 52k likes since the time it was posted. “Jas ko preet mil gayi,” read the text on top with a cute cartoon caricature of the two. They were seen sitting on some rocks on the beach munching on buttered toast, and Sanjana Ganesan interviewing Jasprit Bumrah with a mic. “Bowls you over,” concluded the creative post by Amul.

This is not the only creative by Amul to have gone viral on social media. Recently, they shared a clever take on the interview of Prince Harry and Meghan Markle. “Harry for it,” they wrote with a sweet image that declared the interview to be a “Royal Soap Oprah.” Check it out:

What did you think of the funny and clever post by Amul? Tell us in the comments below.

About Aditi AhujaAditi loves talking to and meeting like-minded foodies (especially the kind who like veg momos). Plus points if you get her bad jokes and sitcom references, or if you recommend a new place to eat at.